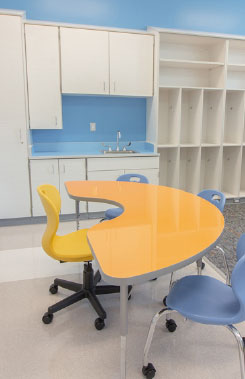 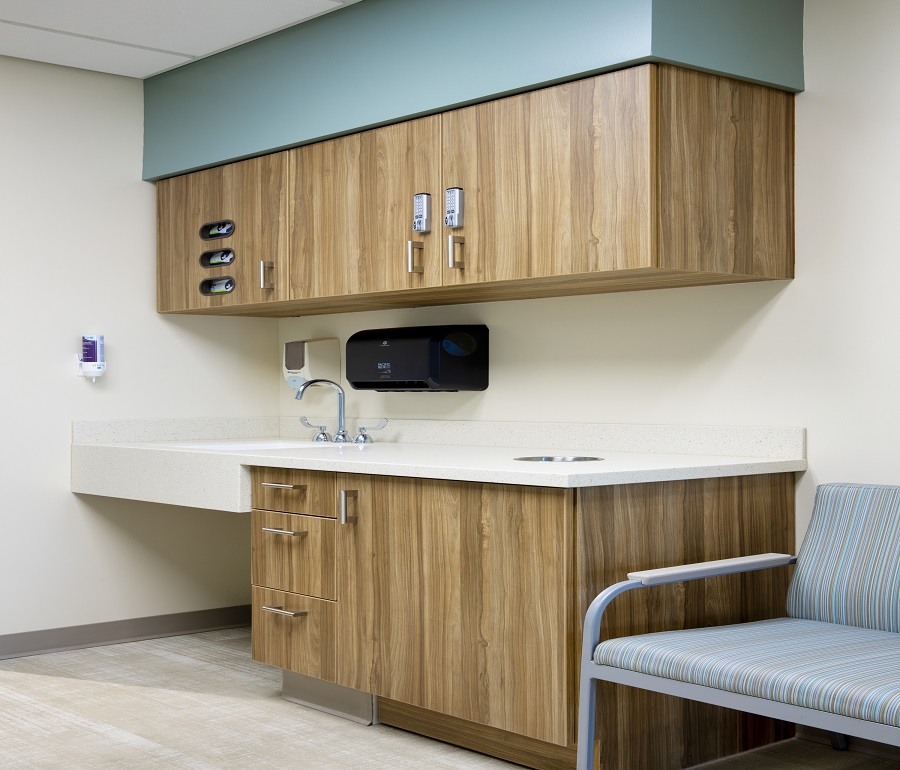 The TMI factories in Dickinson, ND, each utilize some of the furniture industry’s leading equipment technology.

TMI’s offices were built in 1988 and expanded in 1996. Consisting of 30,000 square feet, they are attractive and technologically current. A computer network connects pre-production activities with manufacturing processes and serves the offices and factories. Technology enables TMI to manage massive amounts of information, stay efficient, and be responsive to customer needs. 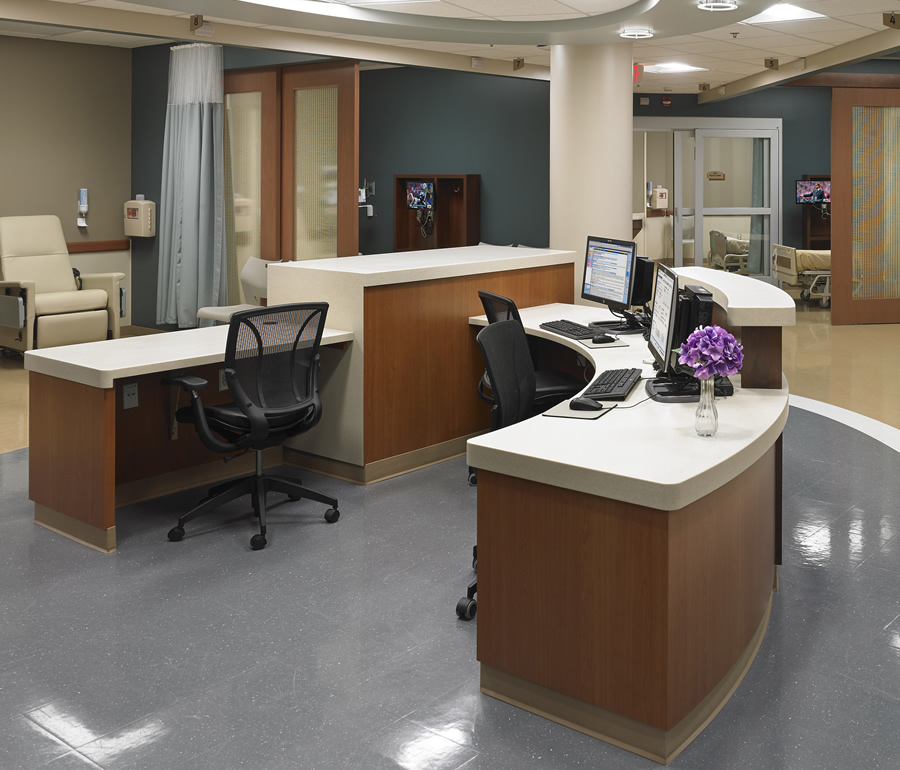 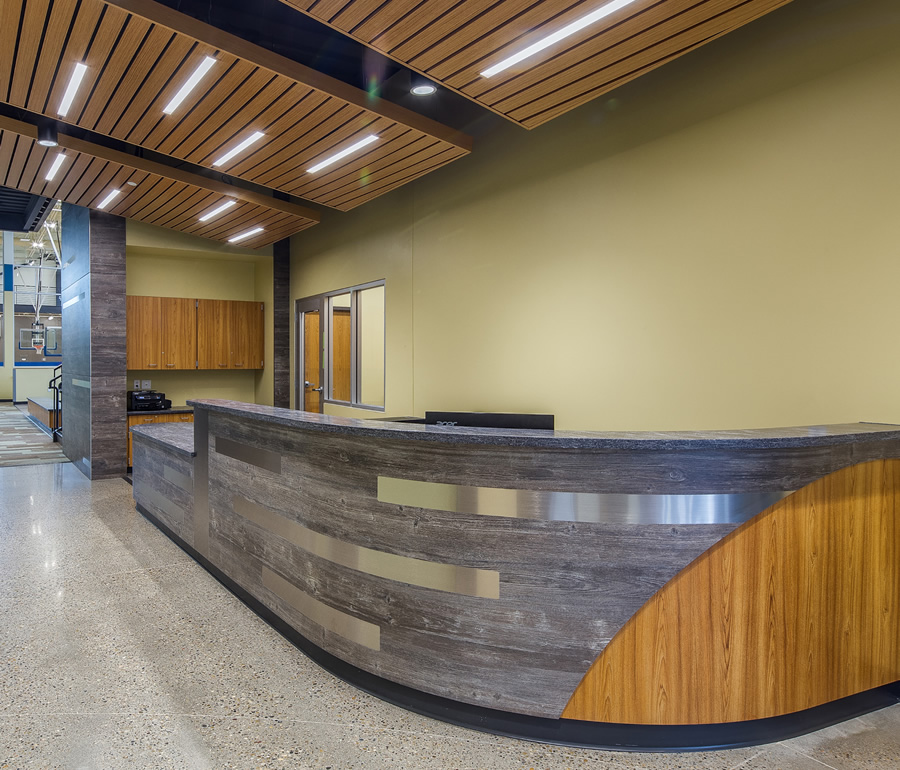 The experienced factory staff work with various architectural woodwork materials that have been uniquely designed for each project. This includes laminates, solid surfacing and 3form, hardwoods, veneers, metals, glass, and a variety of hardware specific to the design for each project. TMI employs technology to engineer fully customized millwork that accommodates the end user’s aesthetics and needs.

TMI Transport is responsible for shipping TMI’s products across the United States, enabling us to control delivery. As TMI employees, our drivers help to ensure our products reach the job site on time and in good condition. They stay in contact with our dealers, customers, project managers, and job superintendents while en route to coordinate delivery and ensure an efficient unloading process when they arrive at the job site.

TMI Transport was started in 1973. Today it full-service leases 15 tractors and 32 furniture vans. 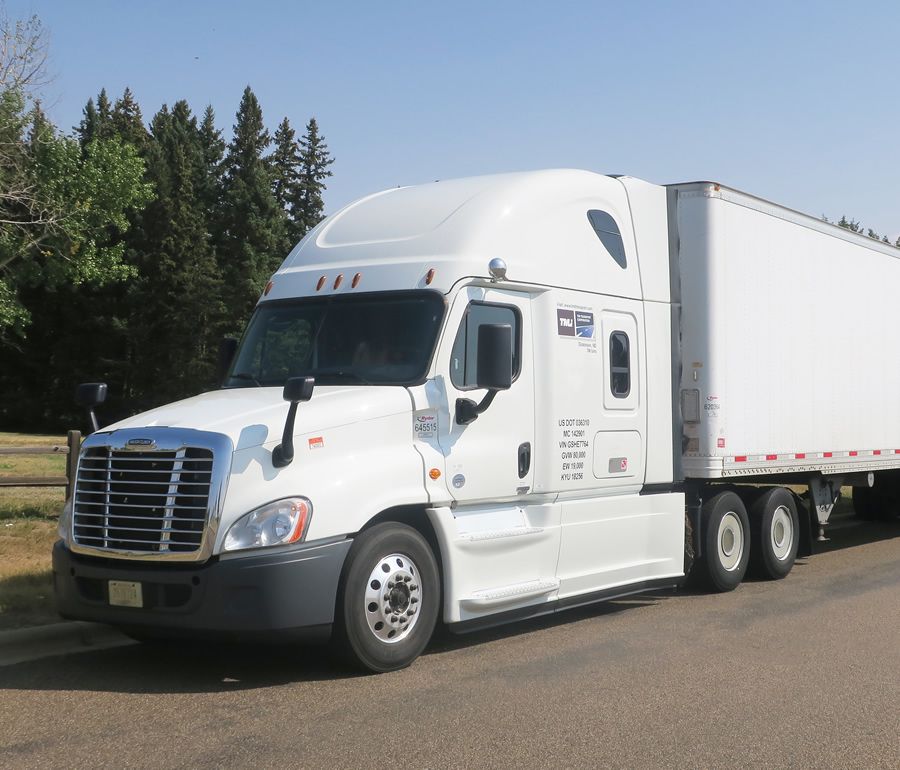 TMI’s pursuit of World Class excellence is embodied by having the product scope, services, and manufacturing scale for large, complex construction projects. Our products conform to specifications, drawings, and industry standards and are delivered complete and on time.

TMI has 14 independent dealers located across the United States. TMI’s dealers are responsible for promoting the TMI products to owners, architects, general contractors, and construction managers. They are also responsible for bidding, project managing, and installing TMI products.

TMI has been under the average DART (Days Away Restricted Time) rate of 3.1 for U.S. manufacturing companies. For the past six years. We achieved a rate of 0.0 in 2021, and we are currently at 0.0 to date in 2022. The TMI manufacturing division reached 450 consecutive days without a lost-time accident in 2021. 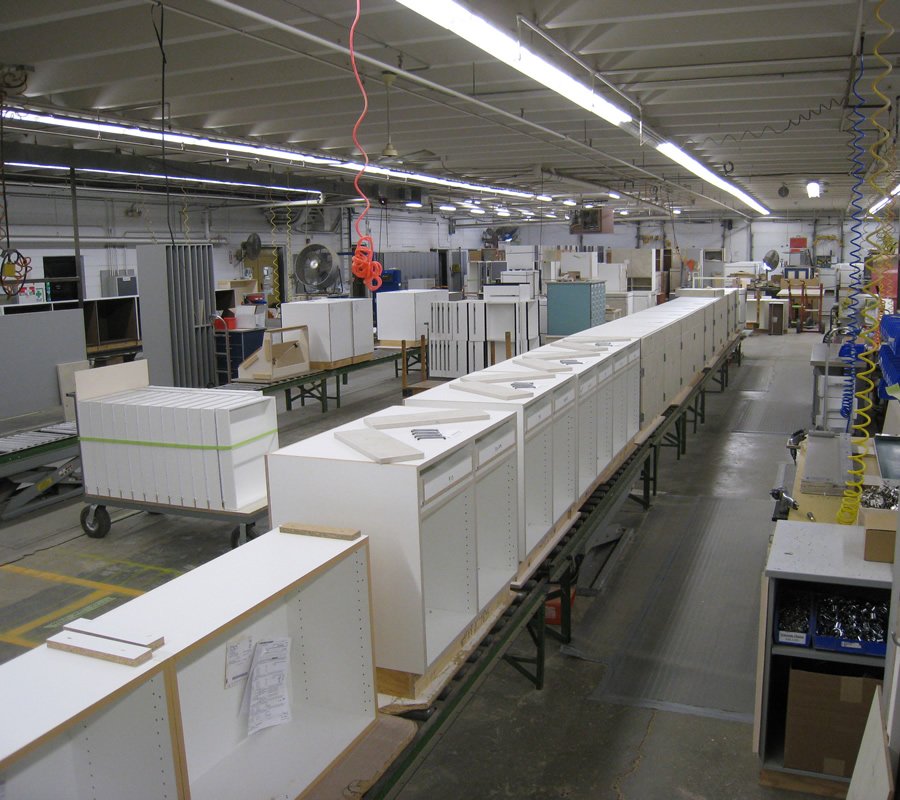 TMI focuses on its customers. Forming positive business relationships with dealers, architects, and contractors is essential to success in the construction industry. Positive customer-business relationships are created by communicating face to face, keeping commitments, working professionally, and treating customers with respect.

TMI focuses on its employees by creating a safe work environment that provides people with the opportunity to be successful. The TMI factory is modern, well-lit, and clean, with spacious workstations adequate for efficient job functions. TMI employees are well informed. Since 1979 we have been an open book managed company, sharing financial, safety, and business information with all employees at quarterly company meetings.

Be market-driven rather than product-driven

The strategy to custom manufacture and supply multiple products for construction projects in the several market segments served by TMI and its distribution network is key to being market-driven. TMI’s current product offering of laminate fixed and rail-mounted flexible casework, mobile casework, architectural woodwork, and countertops are attractive to dealers, architects, construction managers, general contractors, owners, and end-users. TMI believes custom-built products better meet the needs of the customer.

TMI has developed sophisticated information management systems and production processes to manage large quantities of information accurately. Our market-driven strategy enhances our ability to price, engineer, and manufacture a nearly infinite combination of casework products by offering many variables in terms of colors, dimensions, hardware selections, materials, and construction details. 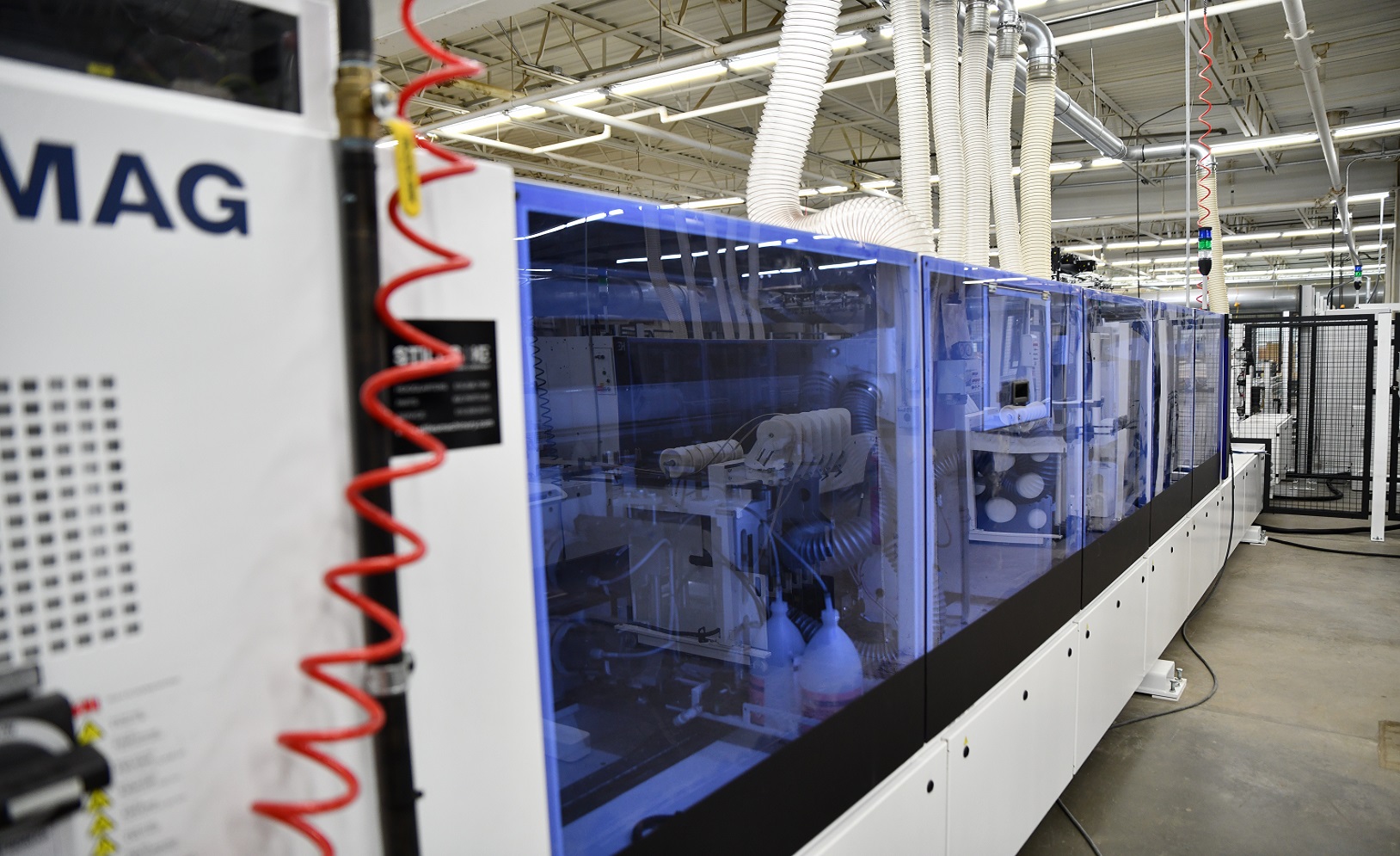 do business from a position of financial strength

It was financial strength that enabled TMI to withstand the rigors of the “Great Recession” and be in a position to capitalize on the recovery of the construction markets. 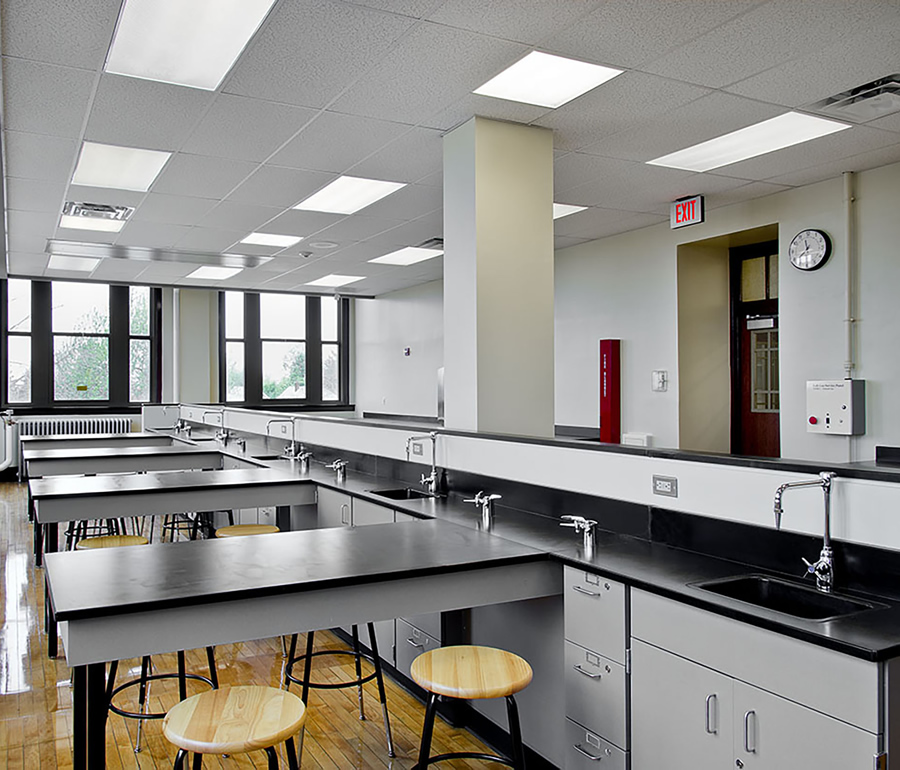 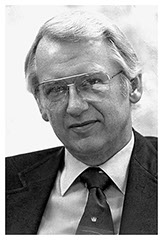 TMI was founded in February 1969 by Larry R. Strand. He started TMI at 31 with $25,000 and an agreement to acquire some of the assets and assume some of the liabilities of the bankrupt Hauck Millwork Company. Hauck Millwork started manufacturing in Dickinson, North Dakota, in the early 1950 but discontinued operations in 1968. Strand immediately focused on manufacturing laminate casework for the national education market and building a nationwide network of independent dealers.
1969
1971

The national construction market in TMI’s early history was heavily unionized. Larry recognized that it would be advantageous for TMI to have a union-made product. In 1971, he invited the Carpenter union to organize the TMI employees. Today, TMI factory employees are represented by the North Central States Regional Council of Carpenters.
1971
1973

Due to TMI’s remote location in North Dakota and to effectively service a national market, Strand realized that TMI would need to get into the transportation business. TMI Transport Corporation was started in March 1973. The company’s product lines were expanded to include laminate doors, wall paneling, and office furniture.
1973
1979

TMI’s early years were challenging. By the end of 1978, the company was overextended and on the verge of bankruptcy. TMI shed all but its casework line and aggressively cut costs. In early 1979 a Texas competitor failed and offered its backlog to TMI. The added backlog plus the cost-cutting allowed TMI to break even in 1979. TMI went on to experience 24 consecutive years of profitability.
1979 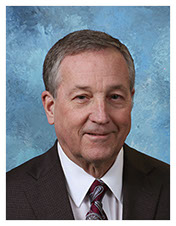 Initially hired in 1974 as an industrial engineer, Dennis Johnson was named president of TMI in January 1982. TMI acquired Bartley Supply Company in July 1982. Based in St. Cloud, MN, Bartley Supply Company is a wholesaler of heating, pumping, and plumbing fixtures and equipment. On February 3, 1984, while returning to Dickinson from a visit to St. Cloud, Mr. Strand died when the airplane he was piloting encountered bad weather and crashed near Tappen, ND. The Strand family decided to sell TMI later that year. A TMI employee group led by Dennis Johnson purchased the Strand family’s TMI stock in May 1985.
1984 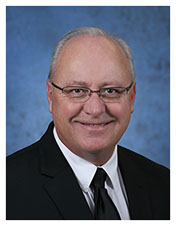 TMI expanded into architectural woodwork, countertops, and direct sales in the late 1980s. At the same time, TMI recognized that the casework market was evolving from a market accepting a manufacturer’s standard product to demanding many more product choices. The number of options grew in quantity and complexity. TMI realized it was in the business of managing information. TMI took advantage of the Y2K challenge and, in 1994, embarked upon a bold software re-write project under the leadership of Tom Krank. Mr. Krank joined TMI in 1979 and, in 2012, was named Senior Vice President. TMI began to convert from a mainframe computer system and stand-alone estimating, drafting, engineering, and materials management software to a client server-based network with highly integrated software. The project was completed and made it possible for TMI to manufacture a highly- customized product line with the ability to download work orders electronically to its significant pieces of factory equipment. The software is known as jSEPP and is a significant competitive advantage for TMI today.
1985-1995 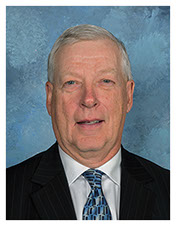 In May 1999, Dean Rummel was named President and Chief Operating Officer of TMI. Dennis Johnson remained as Chairman and Chief Executive Officer. Mr. Rummel had joined the company in 1980 as an accountant. He served as the company’s Chief Financial Officer and Vice President of Sales and Marketing before becoming TMI's third President. In October 2015, Dean announced his retirement effective March 2017.
1999 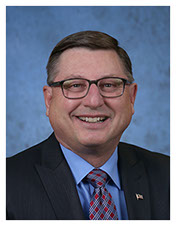 TMI has survived enormous industry changes caused by the “Great Recession” of 2008-2009 and the impact of the Bakken oil development in western North Dakota. TMI is located on the southern edge of the world-class Bakken oil play. From 2010-2015 the company contended with high housing costs, generous oil field compensation levels, and low unemployment due to the oil impact. From 2009 to the end of 2021, nearly 620 direct and indirect competitors of TMI have failed due to the recession
2008-2016

TMI announces the ownership transition from the Johnson family to an Employee Stock Ownership Plan. (ESOP) The newly formed ESOP provides ownership interest for current and future employees. The qualified retirement plan generates significant benefits for TMI’s employees, rewarding those who have played a critical role in the company’s continued success.
JUNE 30, 2019